SHAH ALAM: An Immigration Department officer was sentenced to 10 days in jail by the Sessions Court here for accepting an RM2,600 bribe.

Judge Rozilah Salleh also imposed a fine of RM10,000 upon Mohd Azam Azhari Juhairi who pleaded guilty to committing the offence between 2019 and 2020 at KLIA 2.

He was accused of accepting the bribe and falsifying an entry stamp at the airport.

Mohd Azam Azhari, 39, who was currently stationed at the Bukit Jalil Immigration detention depot, had apparently accepted the money from a man at an immigration counter at the venue.

He was liable to a prison sentence of up to two years or a fine or both under Section 165 of the Penal Code.

When delivering her sentence, Rozilah said Mohd Azam Azhari had failed to do his duty.

“You take care of the entrance into the country. You failed and betrayed trust," said Rozilah.

She said graft did not have victims but instead was a win-win situation for the giver and accepter of bribe.

“But it has a serious implication on society and the nation.

“All civil servants (must) uphold trust and be responsible.

“You are still young and let this incident be a lesson and do not repeat it," she added.

A Ford Ranger vehicle, a Ducati V4S motorbike, a Sworks bicycle in Mohd Azam Azhari’s possession were also seized and handed over to the Malaysian Anti-Corruption Commission (MACC).

Earlier, defence counsel Naim Kamaruddin asked for a day’s imprisonment and minimum fine as the accused is supporting his wife and 55-year-old mother who suffers from acute diabetes.

MACC’s deputy public prosecutors Wan Shaharuddin Wan Ladin and Fadhli Ab Wahab meanwhile, argued that the sentence requested by the defence was not in tandem with the crime that was committed.

They said Mohd Azam Azhari had been given the trust to guard the entry point into the country but had betrayed the trust entrusted to him for the sake of receiving a bribe.

They added a message must be relayed to all civil servants and members of the public that graft was strictly prohibited. 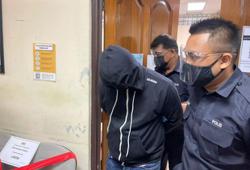