IPOH: A police report has been lodged over alleged breaches of the conditional movement control order standard operating procedures (SOPs) during the ruckus at the 19th Perak DAP convention on Sunday (March 14).

“The ruckus occured between party delegates at about 11am Sunday during the convention.

“It was only a verbal altercation and was brought under control without any untoward incidents, ” he said in a statement Monday (March 15).

“However, a report has been lodged to investigate any offences related to SOP breaches during the altercation, ” ACP Asmadi added.

The incident happened when Kampar MP Thomas Su, who is the party's national assistant organising secretary, alleged that certain candidates held an unfair advantage during the state party polls that were held in conjunction with the convention.

ACP Asmadi said observations by the police found that the number of attendees and the capacity of the hall did not breach the SOPs of the conditional MCO.

“The event was allowed under the conditional MCO as set by the National Security Council, fulfilling the 50% capacity of the hall condition.

“It was a closed-door event and the police were not informed about it, ” he said. 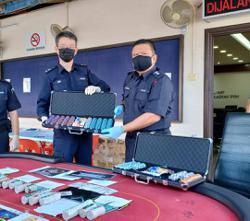