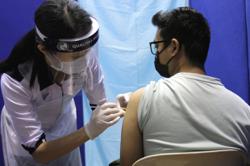 GOMBAK: Police are looking for a 54-year-old man in a robbery case, where two men masqueraded as air-conditioning repairmen robbed a senior citizen on March 5.

Gombak OCPD Asst Comm Arifai Tarawe said that in the incident, two men had come to the house and identified themselves as air-conditioning repairmen and grabbed her necklace before running off.

“The 57-year-old complainant was contacted by a neighbour, saying that his mother has just been robbed at their home in Taman Ehsan, ” he added at a press conference on Monday (March 15).

He said that the follow-up investigation led to the arrest of a 58-year-old man on March 11 at Taman Putra, Ampang.

“He has been remanded for six days and we are currently tracking down the remaining suspect, ” he said.

ACP Arifai then said that Sarwana Baharthi Raja Sami Kannoo is currently wanted by the police and added that those with information on his whereabouts are urged to contact their nearest police station.

In an unrelated case, he said that the police arrested a drug distributor after finding five packets of substance on him suspected to be syabu.

“He was arrested in a housing area in Sri Gombak on March 11.

“We believe that he had been using a car-sharing application to use different vehicles in a bid to cover up his tracks, ” he said.

ACP Arifai added a total of 5kg of a substance suspected to be syabu worth around RM250,000 was seized and said that it is believed that the suspect sourced the drugs from the Klang Valley area to be sold in the same region.