KUALA LUMPUR: Traffic conditions in Kuala Lumpur have eased on Saturday (March 13) after heavy congestion was reported on Friday (March 12).

"We discovered that 80% of cars (compared to pre-MCO days) are on the road and it might have contributed to the congestion.

"However, 90% of the motorists are from the Klang Valley and 10% were from other states. Those checked had proper travel permits," he said.

He added that three roadblocks have been removed to ease traffic flow.

"The roadblocks at Sungai Besi toll plaza and Jalan Duta toll plaza have been removed," he added.

ACP Zulkefly traffic flow in Kuala Lumpur improved on Saturday but there were still many cars on the road.

He advised the public not to move around unless they have urgent matters to attend to.

"Abide by the Covid-19 standard operating procedure so that we can curb the spread of the virus," he added.

Selangor traffic chief Supt Azman Sha'riat said there were no reports of major traffic congestion in the state. 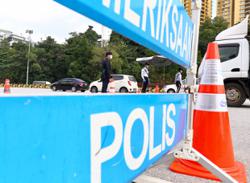