KOTA KINABALU: Please do not appeal against a High Court ruling that allows Christians to use the word “Allah” in their religious publications for educational purposes, urges the United Progressive Kinabalu Organisation (Upko).

Its president Datuk Seri Madius Tangau said the court’s decision to remove the ban on the use of the word for non-Muslims was a partial restoration of the original Malaysia and not an encroachment on Muslims.

“It is a restoration of the pre-1986 status quo, part of the original Malaysia promised to Sabah and Sarawak (freedom of religion) prior to the formation of the federation of Malaysia in 1963, ” he said in a statement on Saturday (March 13).

He said all parties should come together to close an ugly chapter in the playbook of identity politics in Malaysia.

Tangau said this polemic has hurt, for many decades, so many Bornean and Orang Asli Christians, and their Muslim families and friends who share the pain.

“We also appeal to all Muslim-led parties like Parti Pribumi Bersatu Malaysia (Bersatu), Umno, PAS, PKR, Amanah, PBB, Warisan and Pejuang to explain to their base that the High Court’s decision is not an encroachment on or threat to Muslims, ” he said. 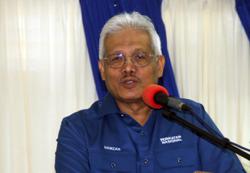