KUALA LUMPUR: Malaysia has won praises from the British High Commissioner here for taking various steps in the past two years to develop the Commonwealth’s goals of Fairness, Prosperity, Sustainability and Security.

Charles Hay noted that Malaysia was one of only four of the 54-member grouping to have the I-Work project, designed to improve the employment prospects of young people including those from disadvantaged backgrounds, by piloting and introducing new approaches to employer-led skills development.

Malaysia was also the first country in the Commonwealth to begin creating an energy and emissions calculator aimed at creating easy-to-use energy models to support climate planning, using the £3.5mil budget announced by the United Kingdom at the 2018 Commonwealth Heads of Government Meeting.

Speaking at an event marking Commonwealth Day at Commonwealth House here on Monday night, Hay said other initiatives taken by Malaysia include hosting the Asia Regional Women’s Political Leadership Conference focusing on policies and initiatives which mainstream gender equality across the Asia region.

“Malaysia also completed the SheTrades Commonwealth pilot, supporting women-owned businesses to become more competitive, promoting economic and job creation. And Universiti Malaya was one of five universities to host Queen Elizabeth Commonwealth Scholars. Since April 2018, a total of 47 scholars have benefited from this scholarship scheme, ” he said.

The High Commissioner said he was delighted that a senior Malaysian diplomat, Datuk Sudha Devi Vasudevan, was recently appointed Chair of the Commonwealth Foundation, the grouping’s agency for civil society headquartered in London.

He also spoke of several young Malaysians who are involved in the Ocean Hope Project, co-founded by a Malaysian, Mogesh Sabathy, which is a youth-led group that aims to raise the visibility of ocean issues and environmental conservation via campaigns and youth leadership training.

“Mogesh is a finalist in the Commonwealth Youth Award 2021, a great achievement in itself, and we very much hope Mogesh will go one step further and be one of the winners in the virtual ceremony to be held on Wednesday, ” Hay added.

Besides this, co-founders of Zero Waste Malaysia, Khor Sue Yee and Aurora Tin, were the most recent winners of the Commonwealth Points of Light Award, with their NGO working in the community and with companies to get zero waste policies adopted by Malaysians and businesses.

This award celebrates outstanding acts of volunteering, thereby inspiring others to volunteer and make a positive impact in their community.

“I’m especially pleased that Zero Waste Malaysia has taken the time to participate and support the series of webinars in 2020 and inspire Malaysians to live a zero or near-zero waste lifestyle, ” said the envoy.

He also mentioned three Malaysian women scientists for their contributions to ocean science – Assoc Prof Dr Goh Hong Ching of UM in a mangrove protection project, Prof Zainura Zainon Noor of Universiti Teknologi Malaysia for a Water Security Hub research, and Hui Ling, a PhD student at the University of Nottingham Malaysia who is researching the effects of micro-plastics in the region. — Bernama 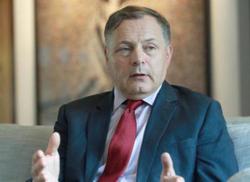