KUALA LUMPUR: More than 1,000 motorcycles were inspected during a special operation by the Road Transport Department (JPJ) here.

"During the operation that began at 3pm on Wednesday (March 10) and ended at 6.30pm, we checked 1,050 motorcycles at the Batu 9 Cheras toll plaza here.

"We took action against 151 vehicles for a number of technical violations," he told reporters when met at the scene on Wednesday.

He said they also found 206 motorcyclists riding without valid licences while 17 others did not have valid road tax.

"We also took action against 86 motorcyclists for having fancy or not having number plates, three for modified exhausts while 32 motorcyclists were issued notices for other technical violations," he said.

Zaki added that the JPJ did not conduct such operations lightly.

"We do not conduct such operations just to issue summonses or notices against vehicle owners.We want to educate them so that they will not cause issues for themselves and other motorists on the road, ” he said.

"For example, if we find that a motorcycle has tires which are against regulations we will tell them that such tires are a danger to them and can lead to an accident," added Zaki.

Zaki also said that when it came to licence plate violations, action would be taken so that such violations do not continue.

"Licence plates are an important means of identification for vehicles especially during accidents or crimes," he added. 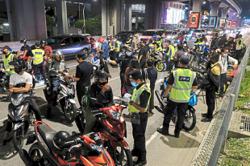