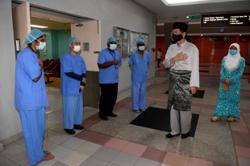 PUTRAJAYA: A Covid-19 outbreak has been discovered among crewmen of a cargo ship in Tanjung Pelepas port in Johor.

“The ‘Pona cluster’ involves crew members of a cargo ship that is docked at Tanjung Pelepas port in Johor Baru, on March 6.

“The ship has a history of travelling to Surabaya, Indonesia, ” said Dr Noor Hisham in his daily Covid-19 statement Wednesday (March 10).

The outbreak has been classified as an imported cluster and the confirmed cases all involve foreigners.

The cluster is one of five new clusters detected by the Health Ministry on Wednesday (March 10).

Two of the new clusters are workplace infections, in which one involves a supermarket in Ampang, Selangor (Dagang Permai cluster, 16 cases) and another at a factory in Muar, Johor (Parit Penyengat Darat cluster, 124 cases).

Another two are community clusters found in Selangor and Sarawak.

The Sungai Puteh cluster has 21 confirmed cases and is an outbreak detected at Kampung Bukit Puteh in Lembah Jaya Utara, Hulu Langat.

The Melor cluster has 14 confirmed cases and was uncovered in Kampung Tengah Beladin in Pusa.

Thirteen clusters have also been declared as closed, after no cases were recorded for 28 days straight.