The Vijay Fans Association of Malaysia were among the first to see the film Master at its 10.30am screening in Petaling Jaya’s LFS Cinema on Friday, during which they handed out Master-themed T-shirts to other fans.

Moviegoers had to strictly observe the SOP inside and outside the three cinemas of the cineplex, which operated at 50% capacity.

Consul-General of Japan in Penang, Kanoya Shinichiro, who conferred the award, said Penang is a favourite destination for Japanese tourists.

The police in Penang had made preparations to assist Japanese tourists, including pictorial cards to answer common questions.

Guides with 24-hour police contact info were also placed in all major hotels on the island for emergencies or assistance. 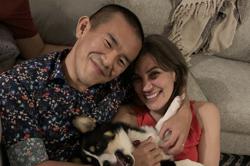