Nearly one million have subscribed to My30 unlimited travel pass since its launch, says Transport Ministry "Previously, the government had introduced the My50 and My100 travel facility which received a good response but when we (Perikatan Nasional) took over, we felt there was room for improvement in efforts to encourage more people to use public transport.

"The My30 initiative involves a relatively large subsidy and is expected to help the people, especially from the B40 segment," he said in an interview on the One-Year Malaysia Prihatin achievements of the Transport Ministry (MOT) under the Perikatan Nasional government recently.

The My30 initiative offers an unlimited 30-day travel pass for RM30 for Malaysian users of LRT, MRT, KL Monorail and Rapid KL stage buses in the Klang Valley, Penang and Kuantan and is open to Malaysian citizens.

Dr Wee also shared the achievement of the Port of Tanjung Pelepas (PTP) in Johor on its improved position in the World Top 50 Container Ports ranking from 18th place to 15th, while Port Klang maintained its position at 12th place.

"What’s more impressive is that PTP recorded the highest growth rate in the world last year at 84.7% due to the port clearance strategies it used," he said.

Dr Wee said the government took the port clearance measures or the release of cargo goods and containers from the ports weekly to ensure the supply of essential items was not hampered while the country faced the Covid-19 pandemic.

"Before the implementation of the port clearance measures, the space capacity at Port Klang, Penang Port and PTP had reached almost 100% following the cessation of the transfer of goods to warehouses before being sent to the final destinations.

"When we implemented port clearance measures during the enforcement of the movement control order, goods that can be exported are sent out directly and goods entering the country are not stuck (at the ports), ” he said, adding that this strategy provided some relief to those involved in import and export activities. - Bernama 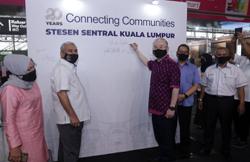