A serious problem: Saifuddin said the police have been investigating cases of fake news, which cause fear and worry among the public. — Bernama

PUTRAJAYA: In Malaysia’s battle against Covid-19, the Communications and Multimedia Ministry has to fight on another front – fake news.

“We set up a rapid response team to debunk them.

“The team spent hours every day to spot fake news so that notifications can be sent out to clarify the issues, ” he said.

He said there had been cases of fake news being investigated by the police or the Malaysian Communications and Multimedia Commission “but I wish we could do more”.

“There is zero tolerance for those who spread fake news and cause panic, fear and worry among the public, ” he told the media in an interview on the ministry’s achievements.

As of March 4, the team had issued 428 denials and explanations on fake news on Covid-19 and 283 investigation papers had been opened by the police and MCMC.

To date, 51 cases had been brought to court, of which 30 were found guilty.

On the Community Communications Department (J-Kom), Saifuddin said that once it was up and running, it would ensure that the government’s official programmes would have sign language interpreters.

Citing the Welfare Department, he said there were more than 45,000 people with hearing disabilities.

“For the government’s programmes, the Information Department will provide the PA system as well as the emcee.

“Soon, we will have a sign language interpreter so that the hearing impaired will be able to get the message as well, ” he said.

He assured that J-Kom would be a non-political entity and that its staff would be multiracial.

The rebranded department had raised eyebrows over the RM85.5mil allocation it received under Budget 2021.

Saifuddin also said that the process to amend the Finas Act had started and meetings and engagement sessions had been done to look into the matter.

“It is not about control but facilitation. That is the spirit in amending the Act. We have kept our promise of not going after people in that sense, ” he said.

Last year, the Cabinet had decided that Malaysians do not need a licence to post videos on social media.

The assurance came after a controversy emerged following a statement that all film production, whether from media outlets or personal media on traditional platforms or social media, would require a licence.

On investigation into the hacking of MCMC’s Twitter account, Saifuddin said that while an internal committee had completed its probe, the ministry was considering seeking the assistance of the police and the Malaysian Anti-Corruption Commission to continue with the probe.

“We have completed our investigation but there are several things probed by the committee that cannot proceed because certain individuals are no longer with the MCMC or with the ministry.

“We are looking into whether the police and the MACC can continue investigating so that we can get to the bottom of the matter, ” Saifuddin said.

A serious problem: Saifuddin said the police have been investigating cases of fake news, which cause fear and worry among the public. — Bernama 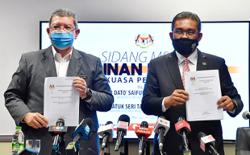 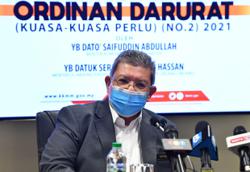