IPOH: The move by two former DAP assemblymen to join Parti Pribumi Bersatu Malaysia is irrelevant as it does not affect the Perak government or the Perikatan Nasional pact, says Datuk Saarani Mohamad (pic).

The Perak Mentri Besar said Malaysia was a democratic country and that people can choose whatever they want.

“No issue. Whatever it is, our focus now is to develop the state, ” said the state Barisan Nasional and Umno chairman after attending a gotong-royong at the Jalan Pasir Puteh flats here on Sunday (March 7).

Both were said to have applied to join Bersatu in December last year.

After quitting DAP following the collapse of the state Pakatan Harapan government in March last year, both became Independents. 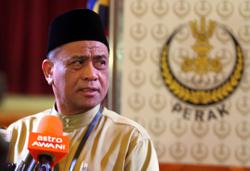 Queen hails adaptive clothes for OKU, urges others to do their bit
KLIA cares for those with hidden disabilities
Sabahans recall royal visit
‘Come and see for yourselves’
Future’s bright for Langkawi, but uncertain for Bukit Malut
HR Minister: Ministry to launch e-wages system soon
Postpone gatherings or scale it down, Sabah govt advises after rise in Covid-19 cases
Covid-19: Nine new clusters detected, six related to workplaces, says Health DG
Massive jam on Penang Bridge after car overturns in accident midspan
Ismail Sabri: EMCO to be imposed on nine longhouses in Mukah, four other locations in Sabah, S'wak