KOTA KINABALU: Train services in Zone 1 here, which include Kota Kinabalu, will resume from Monday (March 8) as cross-district travel based on zones has been allowed in the state, says the Sabah State Railway Department.

Previously, train services from Kota Kinabalu to Beaufort station were halted from Jan 14 when the movement control order was imposed.

However, the Beaufort - Halogilat and the Tenom - Rayoh sectors continued to be operational then.

“Based on the state government’s permission for movement according to zones, the department is restoring train services under Zone 1 effective March 8.

“The department will update the schedule from time to time based on current developments,” Sabah Railway's corporate communications unit said in a statement Saturday (March 6).

It added that the train services plying Zone 2 (Beaufort - Halogilat) and Zone 6 (Tenom - Rayoh) will be operating based on the previous temporary schedule. 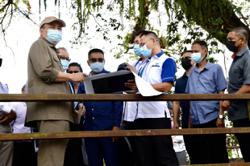