MCA president Datuk Seri Dr Wee Ka Siong and MIC president Tan Sri M. Vigneswaran said although the matter was brought up at the Barisan meeting on Wednesday, the argument was more to oppose a Parliament sitting during a state of emergency, in line with what the King had decreed. 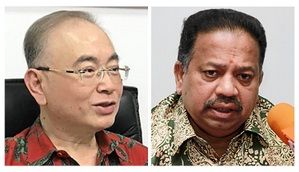 “In fact, I presented the case that we support the decree made by the King that he will act on the matter (order a Parliament sitting) upon the advice of Prime Minister Tan Sri Muhyiddin Yassin.

“I also stated that there is already the Emergency (Essential Powers) Ordinance 2021 which we must abide by, ” Dr Wee said when contacted yesterday.

Vigneswaran said the only consensus was there would be no statement from Barisan with regards to the appeal to the King to order a Parliament sitting soonest possible.

“The King has decreed and we will not put undue pressure on His Majesty with further discussion on the matter, ” said Vigneswaran.

On Thursday, Barisan issued a statement where chairman Datuk Seri Ahmad Zahid Hamidi said the coalition would make an appeal to the Yang di-Pertuan Agong to order a Parliament sitting to be held as soon as possible for lawmakers to debate on several crucial matters.

However, it was later clarified that the statement had been mistakenly released without approval.