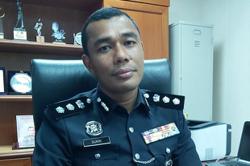 MELAKA: A gang specialising in break-ins at places of worship has been smashed by the police.

“With the arrest, we have managed to solve seven cases of break-ins at places of worship that were reported between December last year to this February, ” he said yesterday.

ACP Mohd Sukri said two vehicles and equipment believed to be used in the crime were also seized from the suspects.

The gang often entered places of worship late at night and stole money from donation boxes.

The two who are currently under remand are being investigated under Section 380 of the Penal Code for theft.