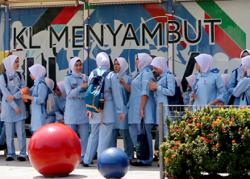 Dr Adham told news portal Malay Mail that the vaccines have only been administered to frontliners.

He clarified that confusion might have occurred as those who had appointments to be vaccinated did not turn up or arrived late.

“I deny there was queue-jumping. What happened was, after investigations, I found that those who were supposed to be vaccinated did not turn up or did not come on time as they should have.

“The issue is that when we open a vial, six people need to be vaccinated at one go. During registration, some of them were there and when it was time to be administered, they were not.

“So we were forced to find others to avoid wasting the vaccine. We still gave the jabs to frontliners. Not those who were accused of getting it because of their connections.

“It was given to frontliners who were present at that time, ” he told the portal on Friday (March 5).

Dr Adham clarified that state executive councillors, elected federal and state lawmakers as well as senators were listed in the first phase of the vaccination programme, qualifying them to be vaccinated as frontliners.

He noted that the ministry also uses an appointment system for vaccination to ensure that only those who are eligible would receive the vaccine.

Malaysia kicked off its National Covid-19 Immunisation Programme on Feb 24 but claims of queue-jumping emerged on social media, causing a public outcry.

The allegations claimed that several aides to politicians and senior government officials had been vaccinated although they did not qualify for the first phase of the programme.

Under phase one of the vaccination programme, the government listed only frontliners as inoculation candidates, consisting of those involved in treatment and health services such as medical officers, dental officers, nurses and others.

On Monday (March 1), Dr Adham had said that individuals who jump the queue to receive the Covid-19 vaccine can be fined not more than RM50,000 or jailed not more than six months, or both.

He had said that such action could be taken under Section 31, a new provision under the Emergency (Prevention and Control of Infectious Diseases) (Amendment) Ordinance 2021, which comes into effect on March 11.