ALOR SETAR: While cracks between Umno and Parti Pribumi Bersatu Malaysia are widening at the federal level, a PAS youth leader says working relationships among the three parties remain harmonious in the state.

PAS Youth vice-chief Afnan Hamimi Taib Azamudden (pic) said the party was confident that members of the ruling pact would not go against each other in the 15th General Election (GE15).

“We have no problem working with them in Kedah for the coming election.

“As for seat allocations at the state level, we have discussed with Umno and Bersatu and we are confident that there will be no three-cornered fights among us in GE15.

“The three parties also agreed that the current administration would remain should the pact win in GE15, ” he said.

Umno recently sent a letter, signed by party president Datuk Seri Dr Ahmad Zahid Hamidi, stating that its supreme council had, in a meeting on Feb 19, decided not to cooperate with Bersatu in the next election.

The letter, addressed to Prime Minister Tan Sri Muhyiddin Yassin as Bersatu president and Perikatan Nasional chairman, also stated that Umno would continue to give its support to the Perikatan government until Parliament was dissolved.

Asked if the situation at the federal level could affect the pact in the state, Afnan Hamimi said PAS was not only able to work with Umno and Bersatu in Kedah, but could also work with former PKR state assemblymen to run the state administration.

“If we at the state can do this, why not at the federal level?” he asked.

PAS has the biggest share of the 36-seat state assembly, holding 15 seats, while Bersatu and Umno have six and two assemblymen respectively after the then Pakatan Harapan-led government was toppled in May last year.

He said the political realignment last year had created opportunities for Amanah to contest more parliamentary and state seats.

In GE14 in May 2018, Amanah won four of the nine state seats its contested – Alor Mengkudu, Kubang Rotan, Kota Siputeh and Pengkalan Kundor.

Of the three parliamentary seats it contested, Amanah only won the Pokok Sena seat through Datuk Mahfuz Omar. 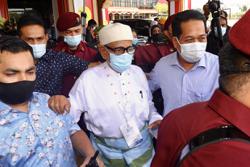