Industry players urged to focus on recovery, not profit 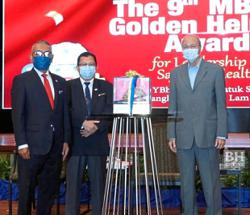 JOHOR BARU: The Johor Indian Business Association (Jiba) is calling for cooperation from industry players in reducing the number of clusters in workplaces.

President P. Sivakumar said now was not the time to recover profit loss.

“This is the time to make small sacrifices for a better future for everyone, and each industry player plays an important role in reducing the number of infections among their workers.

“If this goes on, we will open the doors for another MCO. It will be an endless cycle and cause greater loss of profit if the industries are shut down, ” he said when contacted.

As of Tuesday, the Health Ministry detected seven new Covid-19 clusters nationwide with three in Selangor, two in Johor and one each in Penang and Negri Sembilan.

Sivakumar said the spread in the workplace occurred due to close proximity between the workers, especially in the manufacturing and production sectors.

“Some departments need workers to work in close proximity to finishing a product, but I believe these can be controlled by reducing the number of production targets and workers, and generally operating in a lesser capacity.

“These are the sacrifices that need to be made if we want to curb the spread of Covid-19 in the workplace, ” he said.

He added that another pandemic-related recession could damage the economy as a whole.

Sivakumar noted that employers should also look for other methods of housing their workers outside of cramped dormitories.

“These viruses spread through close contact and touch, so the wider the proximity between workers, the better, and this should be emphasised by employers.

“We have gone through one year of the pandemic and it is high time that workplaces followed the standard operation procedure imposed by the government, ” he said.

He added that aside from the SOP of checking body temperature and registration, workplaces, especially factories, should take it a step further by conducting regular sanitising of production lines as well as equipment used by workers and their uniforms.