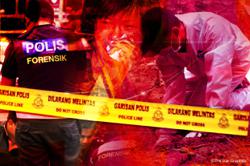 Grisly find: The condition of the flat in Labuan when the authorities managed to break into the unit after a resident alerted them.

KOTA KINABALU: Drops of what seemed to be blood from a ceiling led to the discovery of a body in a flat at Taman Mutiara Sungai Bedaun, Labuan.

A flat dweller on the third floor was in the hallway when he noticed the dripping from the ceiling.

“Together with firemen, we broke down the door on the upper unit and found the body of a man, who was still seated on his couch, ” he said.

He said the man was believed to have been dead for three or four days, and the fluid came from his decomposing body.

DSP Ibrahim said no injuries were found on the body and police did not suspect foul play for now, adding that there were also no signs of the man having taken his own life.

He said the man was believed to be a 44-year-old bachelor from Kuala Penyu in Sabah, who was a general worker.

According to police, the deceased had been living alone in his flat for some time while most of his family members and relatives lived on the mainland.

The body was taken to the Labuan Hospital for a post-mortem, DSP Ibrahim added.

It is learnt that the authorities will seek information from the victim’s family on whether he had any history of chronic illnesses.