PETALING JAYA: The Umno supreme council needs to hold an emergency meeting to make it compulsory for members to vote to cut ties with Parti Pribumi Bersatu Malaysia in accordance with the wishes of 147 party division leaders, says Tengku Razaleigh Hamzah (pic).

The Gua Musang MP in a Facebook post on Tuesday (March 2) said it was compulsory for members to reject the leadership of Prime Minister Tan Sri Muhyiddin Yassin.

Razaleigh, who is also Umno advisory council chairman, withdrew his support for the Perikatan Nasional government in January.

The party later agreed to bring the motion of severing ties with Bersatu at its general assembly which was initially scheduled for Jan 31 but was later pushed to March 27 and 28 due to movement control order restrictions. 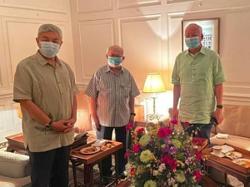