MELAKA: The Melaka government has rubbished a Twitter post claiming that 100 individuals with political connections have been registered as recipients of the Pfizer-BioNTech vaccination in the state, denying frontliners the opportunity to get the jab.

Melaka Health and Anti-Drug Committee chairman Datuk Rahmad Mariman claimed that the post on Sunday (Feb 28) was done maliciously and was untrue.

"The roll-out of the first phase of the National Covid-19 Immunisation Programme is managed by the Melaka Health Department without interference from any politicians," he said on Monday (Mar 1).

Rahmad said Melaka Chief Minister Datuk Seri Sulaiman will be the first to be vaccinated on Tuesday (Mar 2) followed by state executive councillors, assemblymen and frontliners.

He said the first phase will last for nine weeks until the end of April and the database of the recipients would be updated in stages.

Rahmad said that the list of recipients would be alerted through the MySejahtera app.

"Some of the frontliners probably have not received the alerts and have to wait for their turn," he added. 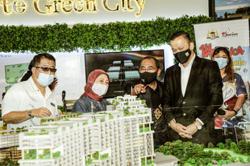