JOHOR BARU: Johor will soon become a major producer of environmentally-friendly energy with the opening of a RM1.4bil solar power plant in Pengerang.

Johor Ruler Sultan Ibrahim Ibni Almarhum Sultan Iskandar made the announcement via his official Facebook page Sunday (Feb 28), highlighting that the project would be the biggest of its kind in South-East Asia with a combined installed capacity of 450 megawatts.

Sultan Ibrahim said the project, to be called the Sultan Ibrahim Solar Park, would have a healthy economic spillover effect for the people in the form of job opportunities at various levels.

“With this exciting project, Johor will make a quantum leap into the world of renewable and sustainable clean energy.

“This project will also mark the state’s first major foray into large-scale sustainable energy to foster green economies and a cleaner environment.

“Johor is one of the states blessed with high sun hours. It is time that we tapped into this resource to boost our power generating capacity and contribute to the production of renewable energy, ” he said.

According to the Facebook post, the project is the state’s first major private investment project for 2021 and the result of the Ruler’s continued efforts to woo investors and spur Johor’s economic growth for the benefit of the people.

Sultan Ibrahim is expected to officiate at the ground-breaking ceremony at the project site in Pengerang on March 23.

The project is also in line with the 2030 Johor Sustainable Development Plan which places major emphasis on environmental preservation and protection as part of the state’s economic development plan for a more prosperous society. 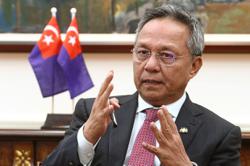