The boys, aged six and nine, were said to have gone swimming in the river on Saturday (Feb 27) evening before they went missing at 6.17pm.

He said the search and rescue team used the skin dive technique to look for the boys in the river, which was less than 2m deep.

The first victim, the nine-year-old, was found at 8.58pm on Saturday, he said.

“We conducted a windshield wiper search technique and found the second victim’s body at 12.10am Sunday (Feb 28), ” he said, adding that both bodies were handed to the police for identification and further action. 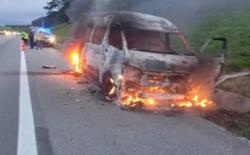