SEREMBAN (Bernama): Two brothers who were on their way to gift a car to their father died on Friday (Feb 26) – one in an accident and the other after suffering a seizure.

Hafidzan Zainal, 44, who driving the new car, is believed to have lost control of the vehicle before it skidded and crashed into the divider on the left side of the road at KM17, Jalan Kuala Pilah Simpang Pertang, here at about 4.30pm.

What made it even more heartbreaking, was that the victim's brother, Mohd Fauzi Zainal, 39, who was driving another car, died when he had a seizure after witnessing the crash.

According to Shah Rizal Zainal, 41, both his brothers were on their way home to Taman Kobena, Senawang here from Felda Pasoh, Jelebu, to present the car to their father, Zainal Sulong, 63, after buying the vehicle.

Hafidzan, who worked as a postman, drove the new car while Mohd Fauzi was driving another vehicle. However, the car driven by Hafidzan skidded.

"Fauzi is believed to have passed out after seeing Hafidzan covered in blood. It had always been their lifelong wish to give our father a car, and their untimely death is very heart-wrenching," he told Bernama.

"The victims were rushed to the Tuanku Ampuan Najihan Hospital (HTAN) in Kuala Pilah. However, Fauzi, who did not suffer any external injuries, died on the way to the hospital.

"A check on Fauzi's medical report found he had a history of seizures," he added.

Hoo said Hafidzan, had lost control of the car, which skidded to the left side of the road before crashing into a concrete road barrier.

Hafidzan was pronounced dead at 8pm due to severe head injuries. – Bernama 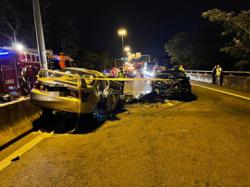