KEPALA BATAS: An insurance agent says she was cheated of more than RM250,000 by a syndicate offering personal loans.

North Seberang Prai OCPD Asst Comm Noorzainy Mohd Noor said the victim, 50, had indicated her interest in an advertisement for loans which she found online.

"The victim, from Bertam, keyed in her phone number in a column of the advertisement, which used the name of a prominent bank," he said in a statement on Friday (Feb 26).

ACP Noorzainy said according to the victim, she subsequently received a WhatsApp message from someone claiming to be an employee of the company and offering a personal loan.

ACP Noorzainy said the victim agreed to apply for the loan and was instructed to make several payments as processing fees and insurance.

"Not knowing she was being duped, the victim was asked to make a total of 25 transactions amounting to RM252,074, into 18 bank accounts provided by the suspect.

"She was told that her application was successful, but could only go through if the payments were made," he said, adding that the scammer then asked the victim to make more payments.

ACP Noorzainy said the victim realised she had been conned when she checked with the actual bank.

He said the victim lodged a police report after unsuccessfully trying to contact the suspect in the hope of getting her money back.

He added that the case is being investigated under Section 420 of the Penal Code for cheating, and investigations are being conducted on the 18 bank accounts. 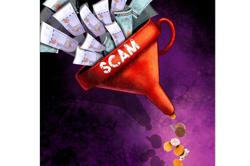