He said an analysis by the Health Department indicated that funerals contributed to four clusters ranging from 25 to 2,000 cases each, while social gatherings led to 11 clusters with 17 to 61 cases each.

There are also five workplace clusters with 10 to 35 cases each and a wedding cluster with 187 cases.

"We need everyone's cooperation to avoid large gatherings which have a high risk of spreading Covid-19," Dr Chin said in a statement on Friday (Feb 26).

He said failure to observe standard operating procedures (SOP) such as wearing face masks, physical distancing and hand hygiene also contributed to the emergence of these new clusters.

"The virus is already in the community. It spreads in crowded places, confined spaces and close conversation," he said, urging the public to continue complying with the SOP.

Both cases had comorbidities of diabetes and hypertension.

This brings the number of deaths in the state to 80 while the tally of confirmed cases now stands at 9,119.

The committee added that 26 clusters remained active in the state, seven of reported new cases. 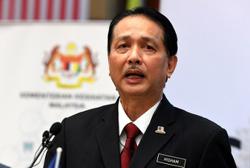