SMK Sungai Soi principal, Zolkifli Abd Ghani said he was informed by staff on duty about the animal that showed up in the school compound at about 10.30am before contacting the rescue team.

He said the Civil Defence Force (CDF) arrived half an hour later to rescue the tapir that had fallen into the school drain.

"This is not the first time this has happened. We are only worried that the animal might wander into the examination hall and disrupt the students taking the exam," he told Bernama.

He said the adult male tapir was believed to have fallen into a drain at the school while eating the leaves of a jackfruit tree nearby.

"There was a wound on the back of the tapir due to the fall, however, initial observations found there was no injury to the leg.

"We will treat the animal before releasing it back into the jungle," he said

Meanwhile, a Pahang CDF spokesperson said an emergency call was received at 10.58am before six personnel were mobilised to the scene.

"The rescue operation was quite challenging as the tapir was huge and had fallen into a narrow drain. We tried removing it with a rope but failed.

"So we contacted Perhilitan to ask for its help, and the animal was rescued at about 5.10pm," he said. – Bernama 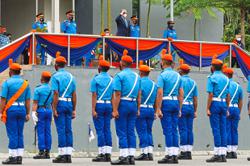