KUALA LUMPUR: The Federal Court has ruled that a Selangor state law which criminalises "unnatural sex" is void as the state legislature had no power to make such laws.

In a unanimous decision, Chief Justice Tengku Maimun Tuan Mat today said it was the court's view that Section 28 of the Syariah Criminal Offences (Selangor) Enactment 1995 was enacted in contravention of a state list that stipulated that state legislatures have no power to make law in regard to matters included in the Federal list.

"To that extent, Section 28 is inconsistent with the Federal Constitution and is therefore void," she said in delivering the decision through an online proceeding.

The ruling came in light of a 36-year-old man's challenge at the apex court in seeking a declaration that Section 28 is invalid, on the grounds that it makes provisions with respect to a matter with which the Selangor State Legislature has no power to make laws on and is thus null and void.

The man's name is being withheld for privacy reasons at the request of his lawyers.

Tengku Maimun, who chaired the nine-man bench, said the primary power of legislation in criminal law resides in Parliament.

State legislatures throughout Malaysia, however, do have the power to enact offences against the precepts of Islam and the range of offences is wide.

"Having said that, the power to enact such range of offences is subject to a constitutional limit," she added.

The court then allowed the man's prayer and made no order as to costs.

On Aug 21,2019, the 36-year-old man was charged under the Syariah Criminal Offences (Selangor) Enactment 1995 at the Selangor Syariah High Court.

He was accused of attempting to commit sexual intercourse against the order of nature with other male persons at a house in Bandar Baru Bangi between 9pm and 10.30pm on Nov 9,2018.

The man claimed trial to the charge and subsequently obtained leave from the Federal Court to commence proceedings by way of a petition against the Selangor government in his bid to seek a declaration that Section 28 of the Enactment is invalid.

The Syariah High Court proceedings were stayed pending the outcome of his constitutional challenge at the Federal Court.

In an immediate statement, lawyers Datuk Malik Imtiaz Sarwar and Surendra Ananth who represented the man said the Federal Court's decision has clarified that the state legislative assembly could only enact purely religious offences.

"In this way, the court has addressed the misconception that there are, in effect, two parallel systems of criminal law of equal standing.

"The court has clarified that there is one system of general criminal law, applicable to all persons, and another system of purely religious law in which offences can only relate to matters of religion," they said.

Malik and Surendra said this would ensure that the law is applied without discrimination. 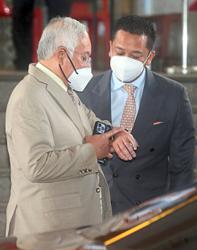