SHAH ALAM (Bernama): An employee of a sand mining company was found drowned at about 11.35am Wednesday (Feb 24), after the boat he was riding in capsized in a 14m-deep sand mine in Kampung Labuan Dagang, Kuala Langat, near here.

Selangor Fire and Rescue Department assistant director of operations Hafisham Mohd Noor said the victim, identified as Muhamad Janil Tani, was on his way to a sand dredge located in the middle of the mine, where he worked.

Hafisham said a team of eight firefighters from the Banting and Shah Alam fire and rescue stations was deployed to the scene following a distress call at 8.13am.

"The victim and four other employees, all local males aged between 24 and 37 years old were in the boat heading to work on the sand dredge, which is located 20m from the banks. On the way, the boat capsized, causing all victims to fall into the water.

"Four other victims - Mohd Roslan Ariffin; M. Firdaus Azhar Samsudin; and brothers Muhamat Junaidi dan Mohd Ribut Negeri managed to swim to safety, ” he said in a statement Wednesday, adding that the victim’s body was handed over to the police for further investigations.

Two of the survivors were sent to the same hospital for treatment while the rest were not injured, he said when contacted.

The police believed the boat capsized due to overloading. - Bernama 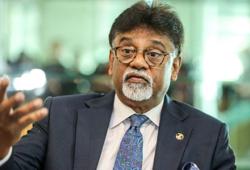