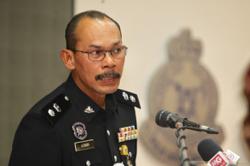 KUALA LUMPUR (Bernama): The police have arrested a local man to assist with investigations into an accident in Bandar Kinrara, Puchong on Monday (Feb 22), which left a van driver seriously injured.

A video showing a speeding car crashing into a van and a another car had gone viral on social media.

Selangor Traffic Investigation and Enforcement Department chief Supt Azman Shari'at said they received a report regarding the incident at about 2.40pm Saturday.

"The complainant is a policeman who happened to be at the scene. He was informed by a man that a crash had taken place and the driver of one of the vehicles had tried to escape but was being held by the public," he said, adding that the man was then arrested and taken to the Serdang police station for further action.

Azman said initial investigations found that the car was being driven recklessly and at a high speed when it hit the van from behind, causing serious injury to the van driver who is currently being treated at the Serdang Hospital.

He said that the victim's condition was as yet unknown.

He added that the case was being investigated under Section 42 (1) of the Road Transport Act 1987. – Bernama