‘Covid-19 passports’ in the pipeline

PETALING JAYA: After being confined in the country for over a year, Malaysians can look forward to travelling abroad again once they are issued with “Covid-19 vaccine passports”.

But there is a criteria to be met – one must first take the Covid-19 vaccine.

Health Minister Datuk Seri Dr Adham Baba announced this following the arrival of the first batch of 312,390 Pfizer-BioNTech vaccines in the country yesterday.

He said discussions were currently underway to determine the type of certification for those who have been immunised.

“We are proposing two ways of doing it, either displaying it in the MySejahtera application or proof in physical form which is a passport that can be accepted by other countries, ” he told reporters at the KL International Airport.

Dr Adham cited the “yellow book” issued by the Saudi Arabian government as an example of physical proof of immunisation shown by those visiting Saudi Arabia.

“We are looking at how to collaborate with other nations to streamline the issuing of the certificates, ” he added.

Transport Minister Datuk Seri Dr Wee Ka Siong, who was also present at the event, said he had been in recent talks with his Singaporean counterpart over the issuance of a “universal certification” to ease regional travel for those who have been vaccinated.

“I’ve also discussed this with the Science, Technology and Innovation Ministry and Health Ministry, we need a certification for those who have been vaccinated, ” he said.

Dr Wee said discussions were on how both countries, including those in the region, could come out with a code or universal declaration with regard to Covid-19 certification.Once in place, he said that it would allow those who have been immunised to travel without the need to be quarantined but this would be subject to other SOP.

The minister also said such a move would help the nation’s airline industry and that of the region to recover.

On a separate matter, Dr Adham said Malaysia was working with Pfizer to become a global manufacturer of low dead-volume syringes to be used by other countries in their vaccination programmes.

He said this was crucial as such syringes would maximise the use of the vaccine to six doses.

A total of 12 million low dead-volume syringes will be used to vaccinate some six million people in the country under the first phase of the vaccination programme. 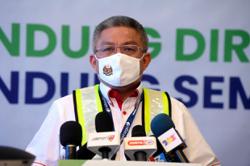