Shape of the future: Yee’s design, which he dubbed ‘Integration of Two’, beat 91 other entries in the station facade design competition.

JOHOR BARU: The winning facade design for the Bukit Chagar station of the RTS Link between Johor Baru and Singapore is inspired by the centuries-old relationship between the two places.

This came to light yesterday as Mass Rapid Transit Corporation Sdn Bhd (MRT Corp) unveiled the design of the station facade, which serves as the Malaysian terminus of the 4km passenger rail link between Singapore and here.

Yee was among 91 individuals who joined the station facade design competition jointly organised by MRT Corp and Pertubuhan Akitek Malaysia (PAM) that ran from Nov 23 last year until Jan 25 this year.

“The competition was the brainchild of Johor Ruler Sultan Ibrahim Ibni Almarhum Sultan Iskandar, who was also the patron of the competition and jury panel chairman, ” Zarif said during the unveiling of the design at a virtual event yesterday.

Zarif said the design, dubbed “The Integration of Two”, was inspired by the centuries-old history between Johor Baru and Singapore, and one that is expected to be further enhanced with the RTS Link.

“This futuristic design makes the station not only an iconic landmark in Johor Baru, but also among the great railway stations in the world.

The winner of the design will take home RM250,000 in prize money, while six others who ranked second to sixth will receive cash prizes of between RM10,000 and RM65,000.

On the progress of the RTS Link, Zarif said the overall progress had been encouraging, with over 70% of the design work completed and the rest expected to be finalised in the next few months.

“Among the key aspects of a project like this are land issues and land acquisition. However, within a short period of time, we were able to settle a lot of issues, including the land in Bukit Chagar.

“Normally things like this take about a year or two, but we were able to settle it within a short time and we are very encouraged by that.

“We are now trying to complete land acquisition for the other part of the project, including the Wadi Hana (train) depot, which we expect to be completed by April, ” he said.

On the three-month public inspection of the project that began in January, Zarif said close to 10,000 people had visited the website, which has been open for comments since January in fulfilment of requirements under Section 84 of the Land Public Transport Act 2010.

“We have received overwhelming support from the public for the project. We will analyse their feedback for further improvements, ” he said.

Construction of the RTS Link on the Johor side began on Nov 22 last year, with the network capable of moving 10,000 passengers each hour per direction once it is completed by December 2026. 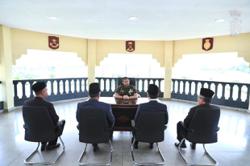