Filepic of Malaysiakini's editor-in-chief Steven Gan speaking to reporters outside the Federal Court.

PUTRAJAYA: The Federal Court here has ruled that Malaysiakini is in contempt of court over readers' comments that criticise the judiciary on an article it posted last year.

In a 6-1 majority decision, the court held that the online portal had failed to cast reasonable doubt on the allegation against it.

"We are therefore satisfied that a case of contempt had been made against Malaysiakini," Court of Appeal president Rohana Yusuf said here on Friday (Feb 19).

The apex court, however, found that Malaysiakini's editor-in-chief Steven Gan is not liable of contempt. 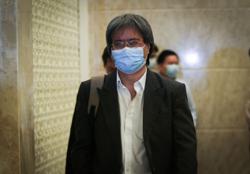