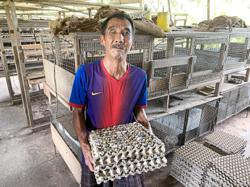 Thinking outside the box: Rusasmizal showing one of the nipah crabs that are being reared in a pond in Kubang Badak, Langkawi. — Bernama

LANGKAWI: Fishermen in Kubang Badak here have cast their nets wider to venture into breeding nipah crabs to supplement income affected by the Covid-19 pandemic.

“Nipah crabs take 90 days before they can be sold. Each nipah crab can weigh more than 500g and can be sold at RM40 to RM70 per kilogramme depending on the size.

“Having operated for almost a year, we have reaped the results three times, with an estimated sales value of about RM8,000, ” he said in a recent interview.

Rusasmizal said the cost incurred was about RM60,000, but he was optimistic about the huge return potential of the project.

“Currently, we are focused on selling the crabs to locals because the movement control order does not allow inter-district or interstate travel.

“Apart from selling the crabs directly to customers, we are building the ‘Mi Ketam Kubang Badak’ brand so that in future tourists who come to Kubang Badak will stop by to try the dishes offered, ” he said.

The village is about 30km from Kuah Town.

The 72-member cooperative had previously offered packages to explore the mangrove forest by boat, to see the 12 geosites that have a unique geological, biological and cultural heritage in the Kubang Badak Biogeotrail, but now these activities have also been affected by the Covid-19 pandemic. — Bernama