Hair cuts first on the list for New Year

By DIYANA PFORDTEN and RENA LIM 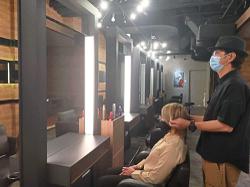 Barbershop buzz Customers waiting in line to get their grooming needs taken care of in Brickfields, Kuala Lumpur, after hair salons and barbershops were given the green light to reopen under strict standard operating procedure. — AZHAR MAHFOF/The Star

PETALING JAYA: Barbershops and hair salons are seeing a spike in bookings after the restriction on haircuts was lifted, despite the seeming absence of Chinese New Year celebrations this year due to the movement control order.

Sales executive Lee Xiao Jin said she made an appointment with her hairstylist once she heard the news.

“They are currently going through some SOP inspection, so they cannot open yet, but I will visit them as soon as they do, ” she said.

Lee said although there would be an absence of festivities during the Chinese New Year, she wanted to have a feeling of normalcy by having a haircut to mark the New Year.

“The salon had plastic barriers to separate one client from another, ” she said.

Feeling relieved at getting her hair done in time, Wong said: “It’s to make me feel like this is going to be the year I become a new person.”

“There will be no reunion, but I’m hoping this will help free the country from Covid-19.”

In George Town, Penang, hairdresser Chew May Ling, 38, said once the announcement was made, her phone was constantly buzzing.

“Most of them are male as they need constant grooming.

“The lifting of the ban is timely. We cannot earn much from haircuts, but it is enough to sustain our business for now, ” she said.

Chew said business was usually good during Chinese New Year, and they could give out bonuses to their staff, but not this year.

“We are looking to cover our costs. But we are thankful that we are allowed to operate, ” she said.

Another hairdresser, Anson Lam, 30, said they were hoping to earn enough to sustain their business for the coming months.

“We earn the most during the Chinese New Year period and we hope to cater to as many bookings as possible.

“I think the interstate ban will affect our business since outstation visitors are not coming back for reunion dinners, ” said Lam.

A tour consultant who only wanted to be known as Leong, 35, wasted no time in going for his haircut.

“I usually get a trim every few weeks. This time, I am getting a haircut ahead of time to avoid the crowd, ” he said.

Insurance agent Mirage Gan, 27, who would usually go for a full treatment for her hair, said she would not be doing anything special this year.

“Due to the slow economy and the duration of the pandemic, it is better to save up and use my savings elsewhere, ” she said. 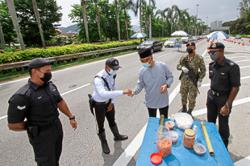