KAJANG: Nineteen barrels of chemicals, believed to be solvents and thinner, have been found at the Sungai Langat river reserve land in Taman Reko, Kajang.

However, no traces of the chemicals were found in the water body close to the site.

“The chemicals are possible river pollutants and should be disposed of as per the Environmental Act 1974.

“The area has been sealed and the Environment Department will clear the site.

“The case will be investigated under the Luas (Amendment) 2020 Bill, where the party found guilty of causing pollution to the water must serve a mandatory jail sentence of not more than two years and a fine between RM200,000 and RM1mil, among others, ” he said after visiting the site Wednesday (Feb 3).

Hee also urged the public to report any suspicious water-polluting activity to Luas via email at aduan@luas.gov.my or WhatsApp to 019-264 7904.

He said whistleblowers could receive a RM20,000 reward if the complaint was true and the culprits were found guilty in court.

Separately, a clothing factory operating from several shoplots in

Kajang Perdana was sealed for discharging its wastewater into the sewerage lines via its toilet.

Hee said the business owner would be issued a compound notice and his licence revoked.

Span enforcement director Ainal Yusman Mohamad Yusop, who was also present, said business owners found guilty of discharging prohibited effluent into the public sewer shall be liable to a fine of not more than RM100,000 or imprisonment of not more than one year, or both. 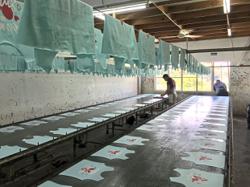 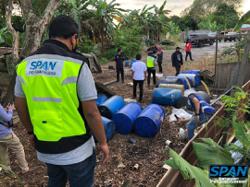