Do more to conserve historical buildings in KL, says Ruler 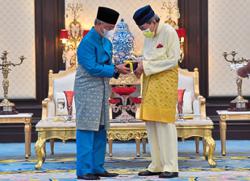 SHAH ALAM: Sultan of Selangor Sultan Sharafuddin Idris Shah has called on the relevant authorities to carry out more intensive efforts of conserving and preserving historical buildings in Kuala Lumpur, especially those related to the state.

Istana Alam Shah, in a posting on the Selangor Royal Office Facebook page, said the Ruler expressed concern that if such efforts were not carried out immediately, the authorities might not be able to save the buildings and monuments from being torn down.

“If that happens, the conservation cost will be higher and this can cause the country to incur losses.

“His Royal Highness hopes that relevant parties such as the Federal Territories Ministry, National Heritage Department and Kuala Lumpur City Hall will carry out more intensive conservation and preservation of these historical buildings, ” said the statement which was issued in conjunction with the Federal Territory Day’s celebrations today.

Sultan Sharafuddin said most of the buildings possessed high historical value and had become tourist attractions in the capital.

His Royal Highness cited as an example the Sultan Abdul Samad Building, which was inaugurated in 1897 and used as the administrative centre of the Selangor state government when Kuala Lumpur was the state capital of Selangor until 1974, before the capital was moved to Shah Alam.

Sultan Sharafuddin also had the experience of working at the Sultan Abdul Samad Building when serving the Selangor state government in 1968.

His Royal Highness said other historical buildings such as Carcosa Seri Negara, Masjid Jamek Sultan Abdul Samad, the St Mary’s Cathedral, Kuala Lumpur Railway Station and headquarters of Kereta Api Tanah Melayu (KTM) Berhad, the old Istana Negara and Merdeka Stadium were places rich in history involving the formation of the country where most of it was closely related to the early history of Selangor. — Bernama