PASIR GUDANG: A teenager was killed after the car he was in rammed into a tree on Jalan Persiaran in Seri Alam here.

Seri Alam acting OCPD Deputy Supt Shahrulanuar Mushaddat Abdullah Sani said that the 18-year-old was driving from the Pasir Gudang Highway and was heading towards Jalan Gunung in Seri Alam when the incident took place at about 2pm on Thursday (Jan 28).

"The victim is believed to have lost control and skidded towards a road divider before crashing into a tree.

"He suffered serious injuries on the head due to the collision and died at the scene," he said in a statement here on Thursday (Jan 28).

He added that the case was being investigated under Section 41(1) of the Road Transport Act 1987.

"The victim was stuck in the car and we managed to take him out of the vehicle.

"A medical team from the Health Department later confirmed that the victim had died," he said, adding that the body was then handed over to the police for further action. 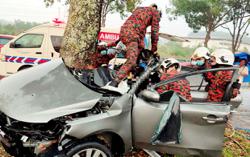