JOHOR BARU (Bernama): A man with a criminal record for several prior criminal and drug-related offences was arrested after a 45-minute chase along the North-South Expressway near Simpang Renggam, Kluang, on Wednesday (Jan 28) night.

"A police officer ordered the suspect to stop his car, but the suspect accelerated to escape in the direction of Jalan Kasa and onto the Eastern Dispersal Link (EDL) Expressway in a dangerous manner, ” he said.

According to ACP Padzli, the car was finally stopped when a police MPV executed a cut-off manoeuvre at KM58 of the North-South Expressway near the Simpang Renggam northbound exit.

Checks revealed that the car was registered to a car rental company and police inspections found drugs believed to be syabu and ecstasy pills, estimated to be worth RM50,000.

He said that the suspect has been remanded for seven days until Feb 2 and the case is being investigated under Section 186 of the Penal Code and Section 39(B) of the Dangerous Drugs Act 1952. - Bernama 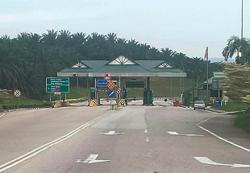