Preacher Ebit Lew with the supplies he brought over for the mission to Sabah’s east coast. - Pic courtesy from PKUM Facebook

The Pertubuhan Kasih Umat Malaysia (PKUM) founder flew to Tawau from the national capital on Thursday morning, and will be heading straight to Lahad Datu for his first programme with policemen at the district police headquarters there in the evening.

In his earlier posts to Facebook and Instagram, the entrepreneur and philanthropist said 1,000 food packs, 100 wheelchairs, 75,000 face masks and 200 multimedia tablets (for students in need) were flown to Sabah for the mission.

Sabah PKUM volunteer head Mohamad Ikhsan Helzy Sutarso said based on the initial programme, they will head to Kunak on Saturday (Jan 30) before going to Semporna to engage with communities there, and then heading back to Tawau.

He was not able to provide a breakdown of recipients as volunteers are still updating the list, but said they are scheduled to visit four villages in Lahad Datu and the district hospital there.

“As for the gadgets for students to use for online learning, we had sought the help of school administrations and teachers to identify those who really need them for PdPR (home-based learning).

“Since the school session has started, they (schools) would be able to determine which students face difficulties, ” Ikhsan said, adding that the breakdown of figures will be discussed Thursday night during their briefing.

Ebit, in a social media post Thursday, expressed gratitude that the volunteer team were given a special rate for flights during the mission by MAS.

“We talked about other missions. MAS Airlines will also join in other charity missions, despite facing the impact of Covid-19 itself, ” he said in his post.

The supplies to be donated had been flown in earlier through sponsorship by cargo airline MyJet Xpress and support service company Zen Aviation. 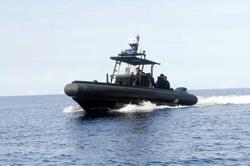