KUALA LUMPUR: A video has been circulating on social media and WhatsApp showing police personnel helping out during the procession of the chariot in conjunction with Thaipusam.

"Checks revealed that the video was recorded while police where helping to speed up the movement of the statue after the organisers requested their assistance.

"This was because only 10 people were allowed to be involved in the movement of the chariot under the SOP listed by the government," he said in a statement on Thursday (Jan 28).

He said the video that was recorded at around 3am on Thursday at the Sri Maha Mariamman Temple at Jalan Tun HS Lee here.

He added the chariot procession proceeded smoothly with adherence to strict protocols and limited participants. 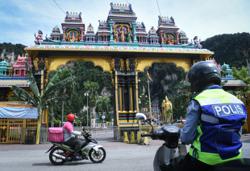