She said the department found three containers containing 3,120 sacks of millet weighing 67 tonnes during their routine inspection at NBCT on Jan 24 and Jan 26 respectively.

“The containers did not comply with the conditions as stated on the valid Maqis import permit.

“The items were seized for further action.

“Failure to comply with the conditions of a valid Maqis import permit is an offense under Section 15 (1) of Malaysian Quarantine and Inspection Services Act 2011 (Act 728), which if convicted can result in a fine not exceeding RM100,000 or imprisonment for a term not exceeding six years, or both, under Section 15 (2) of the same Act, ” she said.

She said the millets will be used as a product that is processed into food and marketed in Malaysia and overseas.

“Maqis will continue to inspect agricultural products entering the country to ensure that imported agricultural goods, fish and animal commodities fulfil the conditions and regulations to ensure they are safe, free from pests and diseases and are halal and safe for human consumption, ” she said in a statement on Wednesday (Jan 27). 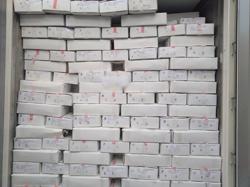