All is not lost: NCID office in Penang razed by fire. — Photo courtesy of Fire and Rescue Department

GEORGE TOWN: The police have stressed that no important investigation documents were lost in a fire which razed its Narcotics Criminal Investigation Department (NCID) office at the northeast district police headquarters.

“Malaysians on social media who read news of the fire have written negative views of the fire, including allegations that the fire was sparked on purpose to destroy evidence and prevent criminals from being convicted.

“We clarify that the fire did not affect any important documents of investigations, including evidence of cases which are still under trial.

“The contents that were destroyed had actually been uploaded into the computer system prior to the fire.

“I urge the public to stop commenting on their ‘speculations’ which may lead to an unhealthy perception among the community, ” he said in a statement yesterday.

ACP Soffian said the cause of fire was still under investigation by the Fire and Rescue Department.

A fire broke out at about 7.50am yesterday involving the department’s office on the fourth floor of a block. The fire damaged about 40% of the area and firemen managed to bring it under control in 15 minutes. 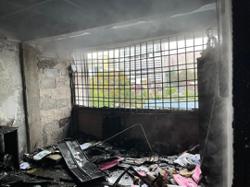