IPOH: A marine policeman has been charged with 43 counts of graft at a Sessions Court here.

Kpl Zubairi Abdul Mutalib with the Kampung Acheh marine police base in Sitiawan, claimed trial to all the charges before judge N. Priscilla Hemamalini.

According to the charge sheet, Zubairi, 60, who is an off-shore patrol vessel unit chief, was said to have received a total of RM146,350 between May 2016 and July 2019 from the savings account of Lim Mee Lan as an inducement not to take action on the owner of several vessels, who had committed offences under the Fisheries Act.

He was charged under Section 17(a) of the Malaysian Anti-Corruption Commission (MACC) Act.

Alternative charges under Section 165 of the Penal Code were also read to him.

The charges under the MACC Act carries a jail term of up to 20 years and a fine of not less than five times the value of the bribes or RM10,000, whichever is higher.

It took a court interpreter more than an hour to read the charges.

He is expected to be charged for another 101 similar charges on Wednesday (Jan 27).

MACC Deputy Public Prosecutor Nurul Wahida Jalaluddin proposed bail to be set at RM40,000 due to the seriousness of the case.

Lawyer Muhamad Aizat Fakri requested for bail to be set at RM5,000, informing the court that his client was only told two days before that he would be charged.

“My client is the sole breadwinner. He has two children and an aged mother to care for, ” he said.

Priscilla set bail at RM25,000 with one surety and fixed Wednesday for mention.

As the proceedings ended late, the accused was unable to post bail and was taken to the MACC lock-up. 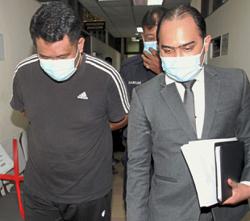