The Deputy Chief Minister said the state disaster management committee had requested for the upgrade since in September last year, as only the Sarawak General Hospital here along with the Sibu, Miri and Bintulu hospitals were designated Covid-19 hospitals at the time.

"We foresaw the need to increase our capacity to handle the situation if cases rise, so we requested other hospitals such as Kapit, Serian, Bau, Sri Aman, Sarikei and Limbang to be upgraded.

"Lately we've been informed that they are approving RM33mil for upgrading these hospitals. It's a bit late but never too late.

"We hoped they could have given us (the funds to upgrade the hospitals) earlier because we foresaw that if the numbers increased to where they are today we would have problems with facilities," Uggah said at the committee's briefing here on Tuesday (Jan 26).

Sarawak currently has 1,706 active Covid-19 cases after more than a week of triple-digit daily new figures.

The state reported 205 new cases on Tuesday as well as three more deaths, bringing the tally of confirmed cases to 3,704 and the death toll to 33.

Uggah said all three deaths were in Sibu Hospital, involving men aged 59,76 and 91.

Pakan, Betong and Meradong reported two cases each while Samarahan, Saratok and Marudi had one each.

"We are using Borneo Medical Centre from the private sector and also Universiti Malaysia Sarawak (Unimas). Up to today we have a capacity of 5,500 tests daily.

"Limbang has had a testing facility for the past seven months. We are building one in Kapit and upgrading in Sarikei.

"We hope that in three to four weeks' time, we will have a capacity of 6,500 tests daily, including from the private sector," he said, adding that the increased capacity would help reduce the waiting time for results to under 36 hours. 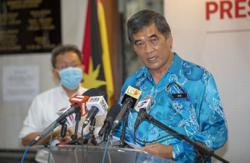