PETALING JAYA: The two Malaysians charged with terrorism offences in the United States alongside Indonesian Hambali had been to Afghanistan where they met then al-Qaeda leader Osama bin Laden.

Nazir, 44, was born in Muar, Johor, where he studied and then worked with a cleaning company before going on to peddle soya bean drinks.

He studied at a polytechnic in Jitra, Kedah. He went to Afghanistan in 2000 where he met Osama, pledging his loyalty and allegiance to the latter, who was slain by a US military strike force in 2011.

Meanwhile, Farik, 45, from Kajang, Selangor, studied locally and went to Afghanistan in July 2000 to attend arms training and met up with Osama, to whom he also pledged his loyalty and allegiance.

He was handpicked by Hambali, whose real name is Riduan Isamuddin, to be part of the so-called Project California and was also his bodyguard and lookout man.

Thai police arrested Farik in June 2003 and he was later handed over to the US Central Intelligence Agency.

In 2003, the two Malaysians and Hambali himself were detained in secret locations before being transferred to the high-risk prison in Guantanamo Bay, Cuba, in September 2006. 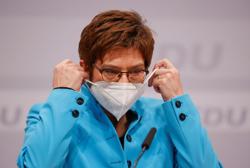