KEPALA BATAS: Fascinated by videos of policemen going after bad hats from the time he was a toddler, ailing Mohammad Ammar Dhani Mohd Azuan found out that the men in blue also have a heart.

The seven-year-old, who is suffering from stage four leukaemia, was thrilled to meet North Seberang Prai OCPD Asst Comm Noorzainy Mohd Noor and his team at the district police headquarters here yesterday.

“I want to be a cop and catch bad guys!” were the first words he uttered to ACP Noorzainy.

This seemed to work wonders with the district police chief, who took Ammar for a spin around the area in a patrol car and got the boy to help look out for violations of the movement control order.

As the patrol car’s siren blared, Ammar’s excitement grew as he waved from the window.

“I want to get the criminals, ” the boy from Penaga told ACP Noorzainy.

Nur Syazwani Mazlan, 30, who accompanied Ammar, said her son started watching videos of policemen in action on YouTube since he was just over a year old.

“Even his toys are pistols and handcuffs, ” she said, adding that things became bleak when Ammar was diagnosed with the illness at the age of two.

“He was a healthy baby but started developing fevers and swelling on his cheeks at age two. Doctors spent months investigating and finally made the diagnosis.

“Ammar has undergone numerous chemotherapy and radiotherapy sessions but his condition did not improve. Eventually, his lungs were affected and the doctor advised that Ammar should rest at home.

“He is no longer on medication and we just want to fulfill all his wishes, ” she said of the oldest of her four children.

ACP Noorzainy said Ammar’s wish to ride in a police car was conveyed to him by a policeman and he decided to make the boy’s dream come true.

“We were on our toes due to the MCO, but we were moved when we heard about Ammar. We pray for the best, ” he said. 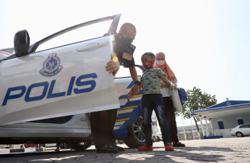 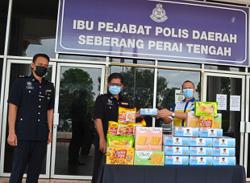