Perak Wildlife and National Parks Department (Perhilitan) director, Yusoff Shariff said the wild elephant, aged between 30 and 35, wandered in the school grounds damaging the electric fence but no one was injured.

"Our staff went to the school to repair the fence and increased the voltage on the charger to 9.1 which together with the blue LED lights should be able to scare off elephants," he told Bernama here Thursday (Jan 21) when asked to comment on a one-minute-16-second video showing an elephant at the school, which has now gone viral.

He said Perak Perhilitan had installed the electric fence around the school since November last year to prevent wild elephants from entering the premises.

He called on residents in the area to help Perhilitan maintain and look after the fence as it was installed to protect the children, teachers and for everyone’s safety. - Bernama 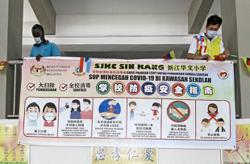