The Johor police chief said the woman was issued the compound around 11am on Wednesday (Jan 20) at Jalan Yayasan 3 commercial centre in Segamat for not wearing a face mask.

"The individual took to Twitter to air her dissatisfaction over the matter, claiming that the area was not crowded.

"However, based on an investigation, there were people walking around the shop and the premises surrounding during the incident. Her statement claiming there was no one in the area and that the place was not crowded was untrue.

"She was also with another woman who is a cafe worker when the compound was issued, but the second person was wearing a face mask," he said in a statement here on Thursday (Jan 21).

He added that the woman received the compound from the Segamat police Covid-19 SOP compliance task force under Regulation 16(1) of the Prevention and Control of Infectious Diseases (Measures within the local Infected Areas) Regulations 2021.

"Her action of not donning the face mask could cause concern among the public," he said.

He added that police view the matter seriously and would not hesitate to take action against those who fail to adhere to the SOP.

"The police will also continue to monitor public compliance towards the SOP set by the government," he said. 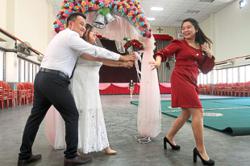