PETALING JAYA: Pictures of LRT, MRT, RapidKL, Rapid Penang and Rapid Kuantan vehicles and stations taken at peak hours during the current movement control order show that there was no crowding on either rail or bus services.

Transport Minister Datuk Seri Dr Wee Ka Siong (pic) assured the public that there was no overcrowding on public transport following claims that a monorail train was packed during peak hours.

He said that since the beginning of the second MCO, the highest load factors for the MRT and KL Monorail was only 15% and 18% respectively.

He added that for the Kelana Jaya LRT line, the load factor was 35% while the Ampang line was 18%.

"Nevertheless, I still advise the public to mask up, avoid crowds and make sure to practise good hygiene at all times.

"Whenever possible, please work from home and do not go out if it is not necessary," he said on his Facebook page on Wednesday (Jan 20).

Dr Wee said although the National Security Council had allowed 100% capacity on public transport, trains and buses were not full.

He said passengers must continue to adhere strictly to all SOPs when using public transport, adding that transport workers would be on hand to ensure compliance for everyone's health and safety.

"If you can physically distance yourself, please do so," he added.

On Tuesday (Jan 19), a news portal reported that it had received photos from a source, purportedly showing the lack of physical distancing among commuters.

The report also stated that the proper SOP was not followed at stations, citing the lack of personnel to control crowds at platforms.

Prasarana Malaysia Bhd denied the report, stressing that there had never been overcrowding.

It urged the media to verify their information and pledged to grant them access at its train stations to get the real picture.

It noted that ridership of its monorail services dropped drastically from a daily average of 46,000 in 2019 to some 10,000 after the MCO, adding that other services such as the MRT, LRT for Kelana Jaya and Ampang/Sri Petaling lines also showed a similar drop.

It noted that the total number of riders during this MCO is roughly about 150,000 people daily on weekdays, which is about 80% decrease from the usual 700,000. 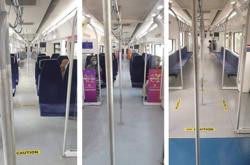